Arezzo has a great tradition of a semi-annual joust of the Saracen, "La Giostra del Saracino." It is held in the Piazza Grande in the center of Arezzo, and the four neighborhoods, "quartieres," compete against each other. It has a long history in Arezzo, dating back to the 13th century in some accounts. The current form of the joust was started in 1931. The four quartieres include Porta Santo Sprito (blue and yellow, in which Andy and I live), Porto del Foro (fuschia/yellow, which my cousin Luca supports), Porta Crucifera (red/green) and Porta Sant'Andrea (green/white). There is a board that the jousters attempt to hit with the lance, with points ranging from 1 to 5. They can win additional points by breaking the lance, or lose points by falling off the horse or letting the balls in the Saracino's hand hit their back.


The giostra is not just one afternoon, however. Ceremonies and celebrations spread throughout the month, and particularly the week before the joust. Each quartiere has a headquarters location, where parties are held each night and a community dinner at the end of the week. Nearly everyone in town wears his or her scarf that represents his quartiere. The rivalries between quartieres can be pretty intense, and arguments and fights are not uncommon.


Parties at the Sant'Andrea quartiere

Parties at the Santo Spirito quartiere

We got to visit Crucifera's museum and see the past golden lances, "lancie d'oro," and some of the helmets they wear. 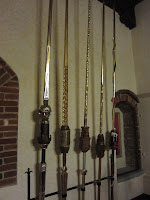 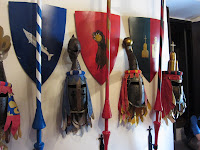 Sant'Andrea flags hanging in their quartiere. The flags are mainly up all year long, but residents make sure they have them out for joust week.

At the joust event they also have trumpeters and flag-throwers (one of the best teams in the world, apparently). They practice throughout the week, and on Thursday afternoon Andy and I walked over to the Duomo and stumbled upon an event where the they were performing for the Miss Italia group.

On the day of the joust, it rained in the early afternoon. The forecast had been calling for rain, but thankfully we only got about 15 minutes of light rain before it stopped. It would have been sad for the joust to be delayed a week. Once the rain went away, fans crowded the corso again, like the Sant'Andrea fans below.

The joust started with the flag men and trumpeters who paraded in. There were even crossbows! There was so much energy in the Piazza Grande. Families have lived for generations in these quartieres, and they are very supportive of them. Most of the time these rivalries are peaceful, but the action culminates with joust week. Walking along the Corso, people will yell at each other or start singing taunting songs. Girls will even get into it too, chasing each other and trying to fight. So you can understand that the day of the event is pretty crazy. Down on the grounds people stand divided by quartiere, it's a little more mixed in the stands. I enjoyed being in the stands because we had a good view over all the action, like the Sant'Andrea guy who kept trying to climb over the stands and fight a Crucifera fan.

After Crucifera won and the joust was over, all of their fans rushed to the Duomo, the main church in Arezzo, to celebrate and see the official presentation of the lancia d'oro. (Fans had already rushed up to the stands and grabbed it in the Piazza Grande, but they do the official presentation too.) I have never seen so much energy in a church. They were singing, counting from one to thirty-six (how many jousts they have won), and some people were even crying.