Es gibt keine Kängurus in Österreich! (Our trip to Wien)

Es gibt keine Kängurus in Österreich! There are no kangaroos in Austria!

Bratislava, Slovakia is a great starting-off place for Vienna. It is cheap to fly into, cheap to stay in, and only an hour by train away from Vienna. We had planned on taking a sightseeing river cruise for the way there, but the Danube river had been too low and the boat was not in operation. This worked out for the best though, because a worker at our hostel informed us that if we bought a certain round-trip train ticket, we could use it for free travel on public transportation in Vienna all day. This was perfect because we didn't have a map of the city and were planning on just exploring as we could, so it was nice to be very flexible with transportation.

Upon arrival in Vienna we stopped at Starbucks. We love drinking espressi and cappuccini in Italy, but sometimes a girl's gotta have a Caramel Macchiato! They also had free wifi and clean bathrooms so it was a good place to start our day and figure out where we wanted to head first.

One of our favorite souvenirs we saw in Vienna was the sign (also printed on tshirts, etc) "No Kangaroos In Austria!" I know some geography-challenged people that could hang this sign in their rooms.

We decided to head over to the opera house and see what we stumbled upon on our way there.

It was fun to be further north in Europe because it really felt like fall. The trees were changing colors, the temperature felt brisk and it was a little overcast in the morning.
"Days grow colder, night grows longer, summer says its goodbyes..."

We found a cool looking Soviet monument next to an even cooler art sculpture monument thing about time.

We had lunch at the delicious 1516 Brewing Company.

After lunch we took the afternoon to explore again and see more sights in Vienna! We saw some more churches, the big Swarovski store, a dog with dreadlocks

We stopped at a café for coffee, tea, desserts and relaxation. Tried to head back to Bratislava but got on the wrong tram for a stop. Got on the next one as it turned back and headed right back to the station. Lookin' like fools, but we had a great time doing so. I loved Vienna, it was so beautiful, full of culture and really interesting!
Posted by Devon at 2:50 PM No comments:

For our first out of country travel (besides Vatican City), Andy and I went to Bratislava, Slovakia! How did we decide to go to Bratislava, you ask? Well, one afternoon about a week earlier my friend Lindsay asked, "Hey Devon! Do you want to go to Bratislava a week from Friday?" I said "Of course!" and checked with the husband, went to her apartment and booked the flight. Honestly. We were attracted because it was different, has the most number of castles/chateaux per capita, and is cheap to eat and stay in! It was spur of the moment and random, which was exactly why I wanted to go. It ended up being me, Andy, Lindsay, Eleanor and Wazhma, and we had a lot of fun together!


With Andy and Lindsay before heading to Roma.

We went down to Rome on Thursday night, got lost trying to walk around the Vatican walls, finally found Rowdy and Pat and had a fun night. We went to Campo Di Fiori, where a magician provided us with a quote for the rest of the trip. The only Italian he seemed to know (or at least it was the only word he said during his five minute show) was "Guaaarrrrdaaaaaaa" or "watch!" It was quite entertaining. We explored Rome some more that night and the next morning before heading out to Ciampino.

This was our first time flying out of Ciampino, and flying on Ryanair. Rowdy had warned us about some of Ryanair's quirkiness--like how they play classical music as you are boarding, before you take off. Nice try, Ryanair, but you will never be classy with your bright yellow airplane interiors and ads everywhere. Secondly, whenever a Ryanair flight lands on time they play the First Call bugle song. Example here. Of course, they falsely schedule their flights for longer than it will really take so that they can make more of their flights on time. Most airlines do this, but Ryanair does it worst of all. Anyways though, it was quite amusing to us since it was our first time on this budget airline.

Another funny thing about flying Ryanair to a fairly remote location is that you see the same people over and over and over again. There were some men on our flight who were standing near us waiting to board, trying to cut into the front of the line. Walking around Bratislava that night we saw them outside an Irish pub, and then once more before seeing them at the airport on the way back.

We got out of the Bratislava airport (very small but very nice) and found the bus we needed. It was an adventure because the machines were all in Slovak, and wouldn't accept any of our 1 or 2 € coins, only smaller. We didn't have too many 10, 20 and 50 cent pieces so we had to pool together and scrounge up whichever combinations we could in order to purchase our tickets. Our entire trip was quite an adventure, so we decided that if any of us were ever on The Amazing Race, we would dominate. If I can figure out trams and buses in Slovakia, I can do it anywhere. *maybe

Flying in made us feel like we were almost back in the Midwest, seeing so much farmland and some small cities. The landscape is much more American than Italy's. We arrived at our hostel, Hostel Blues, and checked in. Once we were all finished with that, it was time to explore and get some dinner. Bratislava has cool statues all over the old city, so we had a lot of fun posing with them!

According to a website I found: Cumil (The Watcher) - although this bronze Cumil Statue Bratislava Slovakia statue does not personify any of the famous people of the rich Bratislava history, it is definitely the most popular piece of art in the city. Where else in the world could you possibly find a man inconspicuously peeping from a street manhole? No Bratislava visitor can leave without taking a picture of this world rarity. You can easily find him on the corner of Panska and Rybarska brana streets. As Cumil has almost lost his head twice because of the incaution drivers, he has even got his own traffic sign - Man at Work.

From a website: The statue of Schoener Naci (Beautiful Ignaz), an elegant symbol of the city life of the early 20th century, is greeting people walking down Rybarska brana street. The legend says he had lost his mind because of an unrequited love. Although he was very poor, he was walking the streets in Bratislava always well dressed for almost 40 years. The townies used you give him some food and he was, in return, giving flowers to the ladies passing by.

From a website: And the last but not least, the Paparazzi is peaking hidden round the corner of Laurinska street, right at the entrance of the famous Paparazzi fine-dining restaurant.

I love Italian food. I really do. But when you have had it for so long, it is nice to take a break from pasta and pizza, and eat meat and dumplings and deliciousness. We ate in the historic center the first night, and loved our meals. My meal is a little hard to see here, but you can take my word that it was delicious!It was a dish with dumplings and sirloin with a dark cream sauce with a bit of cranberry sauce as well. Andy had a butter potato noodle dish with beef called paparikisch. Beer was very cheap in Bratislava, Andy once got a 1/2 liter for 1,80€. 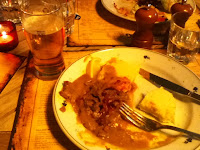 The historic center of Bratislava is just beautiful at night! We loved walking around and exploring.

On Saturday we took the day to visit Vienna, and got to walk by the Presidential Palace on the way.

Slovakia was very interesting. It wasn't quite as Soviet Bloc as I had pictured it, but still definitely had its influences. I loved it; it was fascinating and fun being in a former communist country. I enjoyed how close the Slovak language is to Russian, in which I have a little bit of background. The numbers are quite similar; hello dobry den, goodbye dovidenia and do you speak english? hovoríte anglicky? are close. Thank you d'akujem is close to Polish's thank you. Before we left I taught myself how to say other things like excuse me prepáčte and please prosím...I couldn't say much, but did what I could!

One telling difference to us between Italy and Slovakia was a situation we witnessed on our last day. We were riding the tram to the train station to take a bus to the airport. Sitting there, we each individually realized that this whole weekend we never encountered any ticket checkers. Just a few minutes later, some burly men in regular clothes board. There was nothing telling that they were ticket checkers until they pulled out their laminated badge and started asking to see tickets. A man in front of us tried to get off the tram, but they blocked his way. When another man either refused to show his ID or didn't have one on him, they made him wait until the police got to the train station. This process stands out from Italy where the workers are all in designated uniform and very official. Instead, in Slovakia it is about brute force and huge, scary men. Glad we had tickets!

Another thing we enjoyed in Bratislava was a fake McDonalds kebab restaurant!

We were excited though because the real McDonalds had TOBLERONE McFlurries! We also enjoyed how a lot of foreign words would be nearly the same with a "z" on the end. Like Dezerty. So fun to say!

On our last morning in Bratislava we walked through more of the Old City we hadn't seen yet, and then over to the Bratislava Castle.

We all enjoyed posing on a big bicycle sculpture!

Goodbye, Bratislava! Dovidenia!  We will always remember you with your cheap beer, delicious food, cool culture and our oh-so-clever nicknames for you. Bartislava because of your myriad bars, and Bratislutty because of your attempts to lure men into certain clubs and the alcoholic energy drink (their version of 4Loko?) Sexplosiv. Which we did not try, for the record. We would love to come back to Bratislava sometime in our lives, and if we do I want to visit Devin Castle since it's nearly named after me!
Posted by Devon at 1:51 PM No comments: