First, I must preface this by saying I have an amazing set of Italian family here around Arezzo. I call them my "cousins" because it's easier than figuring out and explaining the exact details, but I also call them that because it is how they treat me. It doesn't matter that we are a bit distantly related, they treat me as immediate relatives. And they have taken Andy into la famiglia and told him that he, too, is now a Carnesciali. They are the best hosts, and the sweetest people. (They also really make me miss my family and cousins back home in USA--love you all so much.)

Summers and falls in Italy are full of "sagre" or festivals. Often they focus on a certain food or drink, but offer full meals of great food and a fun sense of community. My cousin Luca and his family live in Ponte Alla Chiassa, a small town about 10 minutes north of Arezzo. This weekend Ponte Alla Chiassa was hosting a sagra, and Luca invited us to attend it with his family and his girlfriend Martina. One of the specialties of this sagra was a pig's nose. Yes, as food. I did not try it, but I was daring with a different type of food!

You stand in line, order and pay for your food, and go sit down at a table with your ticket. The tables are long, bench style tables under tents. It is crowded, and the service takes a while, but that is part of the beauty of the sagra. It is about community and talking with those around you, having a great time.

Here is a picture that shows an example the table area. This was later on, so not as crowded as the peak eating time. 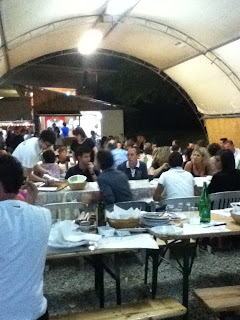 Andy and Luca ordered pizza with prosciutto, I ate maccheroni, Martina ate trippa, Chiara and Francesco ate antipasti and steaks... There is a large variety of food, and you can't* (for the most part) go wrong!

Here is my maccheroni. As you can see, it is not what we think of when we hear macaroni in the US. It consists of long flat noodles topped with meat sauce. (Note: there are other forms of maccheroni in Italy too, but this is the type I have eaten at two sagre.) It is tasty with good flavor, and filling. I made Andy eat about half of mine. (And his pizza was delicious too!) 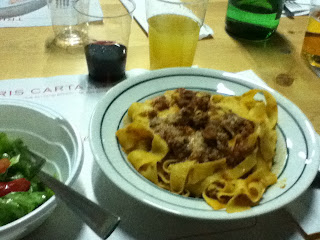 I was also told I act like a northern Italian because I eat my salad before my pasta. In Tuscany the order usually goes: antipasto, pasta, salad, meat (and then dessert if there is some. or fruit for dessert.) I got used to this last time, but haven't broken my American eating-salad-first habit yet.

Martina ordered trippa. In Florence, it references the cow's stomach, often pressed into a sandwich. But in this case trippa is cow intestines. It was a peasant's meal in the past, while the rich got to eat the actual meat/muscle off the cow. Andy and I both ate a bite of trippa. It tasted good, but the texture was a bit chewy for my taste. I am glad I tried it though! 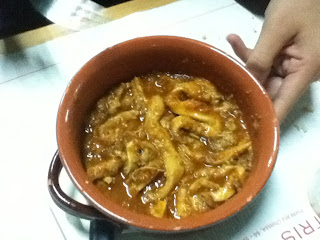 Luca's parents, Babbo Carlo and Mamma Ambra, bought us four desserts to share and sample. They were all delicious! Clockwise from the top was blackberry, jelled fruit with some cream, chocolate and apple. Andy and I were asked our favorite, but it was an impossible decision. The pastries were all so good! 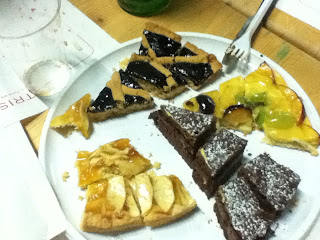 In addition to food, the sagra also hosted music and little carnival games. We played this and Martina won a little cow toy. 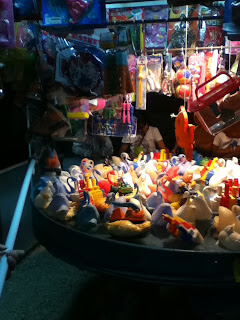 A lot of Italians are intrigued by cowboys, the Wild West, Indians, etc. I already knew this, but it was revealed even more when I saw them dancing after dinner. You know how Americans take classes and learn how to do foreign dances such as the tango and salsa? Well, they were dancing intricate square and line dances to country-ish music and songs from the movie "The Last of the Mohicans." (Note: when we were at a restaurant/bar last Thursday night we also danced to Cotton Eyed Joe and Oh Susanna, so it doesn't seem to be a completely rare occurrence.) It's so funny and cool. 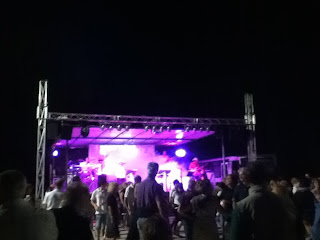 We went back to Luca's house and I got to meet his new (new since last time I was there) cat Billie. He is very playful and reminded us of how our cat Nero acts. That's the funny thing, we named our cat an Italian name and Luca named his cat an American name! Anyways, Billie is very cute and we were glad to have a little kitteh time. 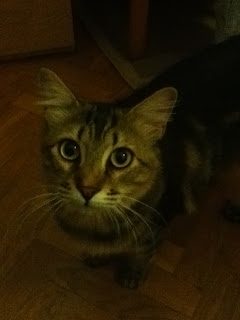 We went over to Chiara and Francesco's house and hung out with some of their friends, Luca and Martina. We got to drink homemade limoncello produced by Chiara's parents. It was delicious! We had a wonderful time and are so grateful to call these people our friends and family. 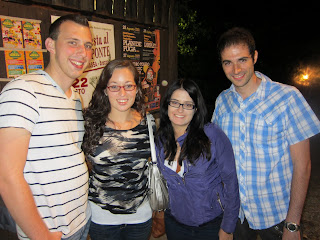 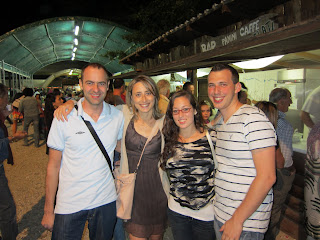