On Monday, August 22nd, around 11:00 am, we departed Rome. Or at least we were supposed to. We had gotten to Termini early, all ready to hop on the train and head to Arezzo, but the binaro (the train line) number never came up on the board. We stood there, assuming they would put it up soon (and forgetting there was a board that listed where it usually comes in. Not always right, but would have helped us.) Well, 10:58 passed and the train went off the board, as in it had departed, and we were left standing in the station. Some stress, a few tears due to the stress (or was that just sweat? It was so stinkin' hot it was hard to tell), and a phone call later and we decided to take the next train two hours later to Arezzo. Our tickets were general ones for that route, so we didn't need to do anything to switch them.

I should have known the ride was going to be an adventure when we had to walk out to Termini's new terminal, 1 East. Far, far away, dragging our heavy suitcases. Before departure, a man came on board with a bucket of cold water, juice and beer. We had a bottle of Gatorade and a bottle of water, and thought there was no need to buy more. Spoiler alert: we would regret this decision immensely.

There was supposedly air condition (it worked for about 10 minutes as we left the station) but trust me, we didn't feel it. It wasn't putting out any air, and we were stuck on this train for the next 3 hours. The guy across from us smelled like B.O. and would get off at some of the stops to smoke, before sauntering back on across from us. Lovely mixture of smells, I tell you. I tried to spin it into a positive, thinking that if I hadn't walked enough pounds off in Rome, I sure was sweating them off on this train. (Makes room for more gelato??)

Halfway through our journey, with about an hour and a half left until Arezzo, we were making sure to ration our water. We had brought some bread and prosciutto onto the train to make sandwiches for lunch, but knew we could not eat because the saltiness of the prosciutto would only make us more thirsty. I decided that if we made it through this train ride without fainting, we definitely deserved a spot on the television show "I Shouldn't Be Alive." There was a reason this trip only cost us 12 euro each. I was sweating, exhausted, and convinced I wasn't going to make it.

But, alas, we did. We got into Arezzo, walked over to the main part of the station, and met up with Lucio, OUA's local student coordinator person. He recognized us because I had "Oklahoma colored luggage." These bags have been in my family for years, and even since attending OU I have never made the connection that they were crimson-colored. We grabbed our stuff, walked over to our apartment and starting moving in. Even after 5 long flights of stairs with heavy luggage, and no air conditioning in our apartment either, I was ecstatic to be off that train.


Tuscany in general is beautiful, but I love Arezzo. I was so happy to be back, and so so glad that this time my husband could join me. (Thankfully, he loves it too!)

We have a community rooftop terrace in our apartment building! 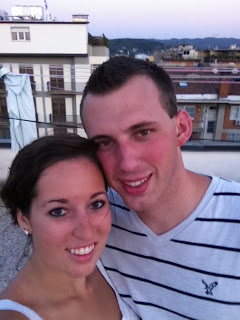 Here is the view of the beautiful countryside from atop the city in the park, Il Prato. 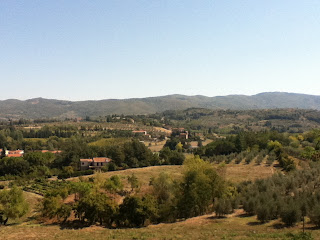 There is beauty all over. I love it. 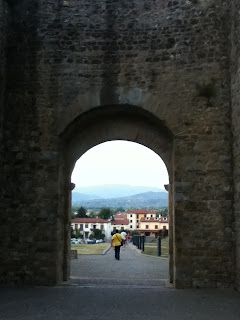 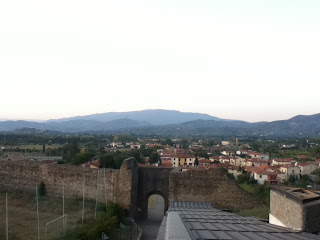 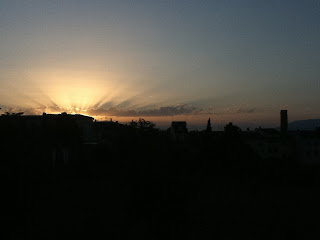 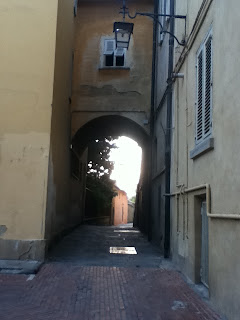 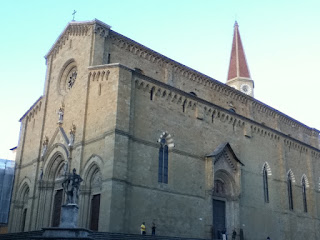 We are blessed and grateful to call this place home for the next four months.
Posted by Devon at 2:09 AM