In Rome, you feel like a true gladiator. Your life is a constant battle. A battle against foreign vendors trying to sell you random toys, knock-off purses, roses, singing cat dolls, rabbits whose ears hit each other and have bells, bubble guns, laser pointers and more. Most spoke English to me, but a few chose Spanish thinking I was a Spaniard. Interesting. I, however, would just say "No grazie." If they were pushy, I would start saying random things in Russian because I knew that was a language they likely would not speak, and they would leave me alone. At one point, a guy near the Colosseum started following me trying to push roses in my hands so I had to loudly say "Lasciame sta!" or "Leave me alone!" That did the trick.

Rome has its vendor problems, but the monuments and scenery outshine anything else. On our second day we walked past Trajan's Column, walked to the train station to purchase our tickets for Monday's ride, walked to the Vittoriano, Colosseum, everywhere. Took the metro twice because our legs were far too tired to keep up all this walkin' business.
(Trajan's Column) 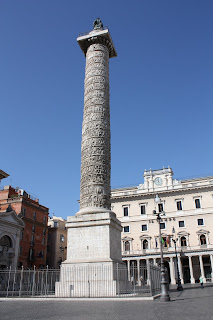 There are beautiful buildings hidden around every corner. 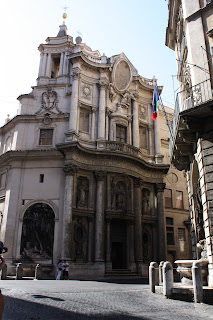 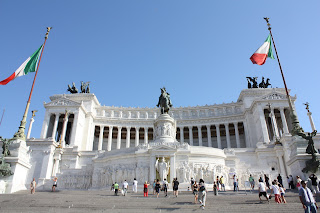 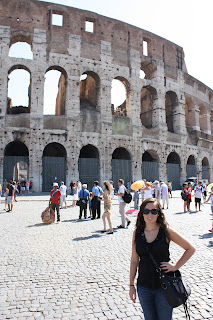 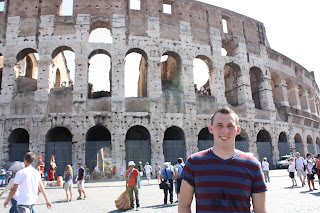 We walked and walked some more. We came to the ancient ruins kitty park. That is not the official name, but sounds good enough to me. Basically, in the middle of Rome there is an area of a bunch of old concrete building ruins, and 50-100 (in my estimate, but probably even more hiding) cats live there. The city pays for them to be vaccinated, etc, and they are available for adoption. There was one that looked just like our kitteh. We miss him a lot, it was fun to see his Roman twin. 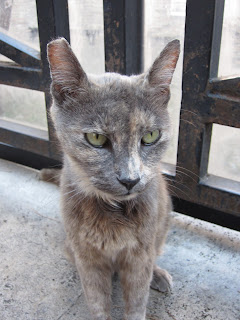 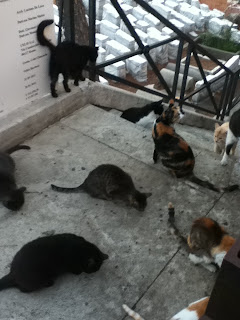 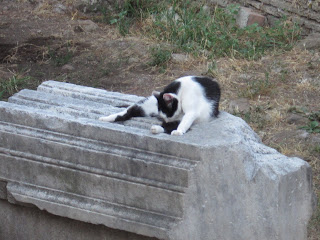 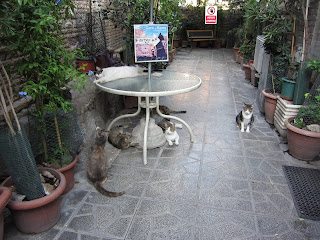 At night we did a tour of the Colosseum. Uh-may-zing. It is so beautiful at night. Gorgeous, incredible. Even cooler being inside of it at night. They had an exhibit on Nero going on, so it was fun to learn about this man, our cat's namesake.

We also got to go down to the bottom of the Colosseum and visit around a bit. Didn't get to walk out in the middle, but it was amazing to think we were standing where lots of animals and gladiators used to stand, the history of the ground upon which we were walking. 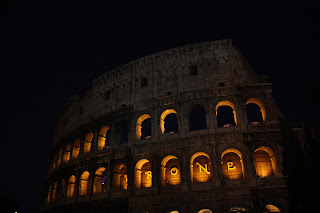 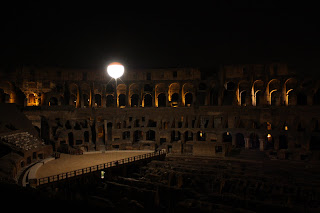 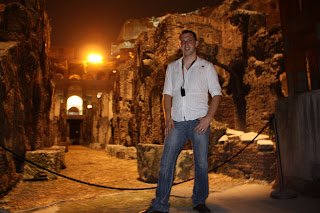 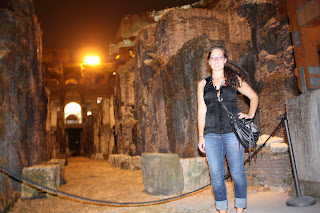 On Sunday, we woke up and walked some more! We walked out to the Villa Borghese and visited the Galleria Borghese (full of paintings and sculptures, particularly some of my favorite Bernini scuptures). We went to the Hard Rock Cafe for lunch, in order to make Andy's parents jealous. Walked around the city more, saw the kitties again, explored. We bought some bread and cheese and prosciutto for dinner, and planned on using it for lunch on the train the next day.

Our last morning we ate breakfast once again in the beautiful Piazza della Rotunda next to a nice fountain and the Pantheon. We saw a movie being filmed a block away. We boarded a taxi and headed to Termini to start our next adventure in Arezzo!

More photos on my tumblr.
Posted by Devon at 3:16 PM